The Heretic’s Daughter by Kathleen Kent 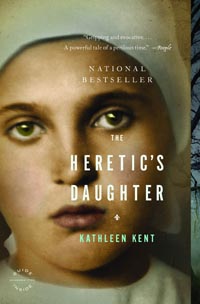 Martha Carrier was one of 19 men and women hanged as a witch in 1692 during the infamous Salem witch trials. Called the “Queen of Hell” by Cotton Mather, Martha was unyielding in her refusal to confess and went to her death rather than join the accused men and women who did so and were spared. From the remaining court records, it can be surmised that she was one of the only people accused who fearlessly confronted her judges, calling them to task for listening to, and believing, a group of hysterical girls responsible for the arrest and imprisonment of nearly 150 colonists.

Kathleen Kent is a direct descendant of Martha Carrier. The Heretic’s Daughter is a novel based not only on the history of the witch trials, but on Carrier family stories passed down through nine generations.