Patrolman Burk was shot and killed when he and another officer responded to a domestic disturbance. While on the scene they arrested one suspect and as they were walking him to the patrol car a second suspect opened fire on them with a .22 caliber rifle. Patrolman Burk was shot in the stomach and fatally wounded. His partner, who was also wounded, was able to return fire and shoot the suspect. The man was convicted but was later released from prison.

Patrolman Burk had been with the agency for 18 months. He was survived by his wife, son and daughter.

Officer Taylor was shot and killed after stopping a taxi cab whose driver was waving him down. The taxi driver had been abducted at gunpoint in Dallas and was being forced to drive to Denison. The suspect made a deliberate traffic violation to get the officer's attention. When Officer Taylor stopped the taxi the suspect shot him six times. The man was convicted and executed in the electric chair on March 18, 1940.

Officer Taylor had served with the agency for 10 years. He was survived by his wife.

Samuel Perry Burks, City Marshal and Fire Chief
End of Watch: Thursday, June 12, 1902
Marshal Burks succumbed to a gunshot wound sustained the previous day. He was shot by a woman after he responded to a prowler call. 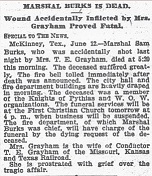 The officer and a night watchman had arrested three people at the scene. The night watchman took two of the suspects and Marshal Burks took the third suspect. As the marshal attempted to place the female suspect into his vehicle, she broke free and ran towards the home. The homeowner opened the door hearing a screaming woman and believing Marshal Burks was one of the prowlers, opened fire with a shotgun.

Marshal Burks had served with the McKinney Police Department for 11 years. He was survived by his wife and three children.