During the 85th Legislative Session (2017), the Texas Legislature approved Senate Bill 6, which amended Chapter 43 of the Texas Local Government Code regarding municipal annexations in Texas.

Learn more about Senate Bill 6 and Chapter 43 of the Texas Local Government Code. 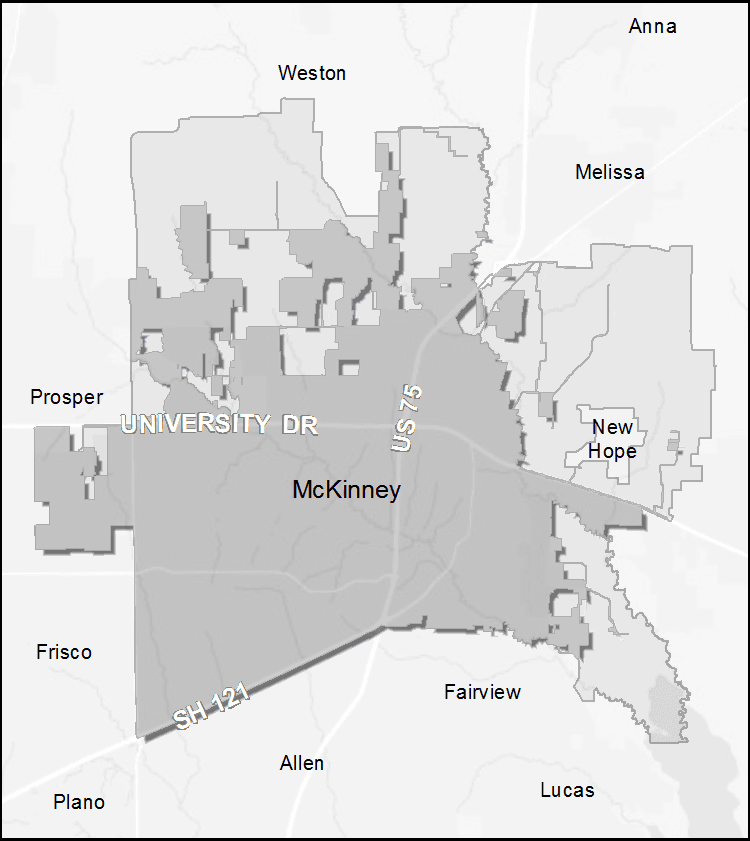 During the November 7, 2017, McKinney City Council Meeting, the City Council voted unanimously to discontinue and terminate the city’s proceedings to annex approximately 3,821 acres of land located generally in the northwest sector of McKinney (City Council Agenda Item 17-249A). Included in this vote was the termination of all other matters related to the annexation proceedings, including the rescission of the City Manager’s authority to execute any and all proposed development agreements. The City Council’s action terminating the annexation case also brought an end to the process of zoning the subject property (City Council Agenda Item 17-250Z) because the city cannot zone property outside its corporate limits. As a result of the City Council’s action, the City of McKinney is no longer considering the unilateral annexation of this area before December 1, 2017, the execution of any development agreements or the zoning of the subject property.

If you have previously signed and/or returned a development agreement to city staff as part of the annexation proceedings, those agreements are considered null and void, without authority from the City Council, and will not be executed by the city. As such, residents included in the proposed annexation area will continue to retain their ETJ status and no further action is required at this time. If, however, you signed an annexation agreement and would like to retrieve the signed document from the city please feel free to pick it up from the Development Services Department during regular business hours. Any signed development agreements that are not picked up by the signing party prior to November 15 will be destroyed by the Development Services Department on or about that date.

Watch the video of the November 7 City Council Meeting

If you have any questions, please contact the Planning Department by email or call 972-547-2000.

Did you receive a letter from the city informing you of upcoming annexation and/or a development agreement? See below to learn more about what this means for you.

During the August 28, 2017 Special Meeting, McKinney City Council approved Resolution 2017-08-160, identifying a preferred approach for carrying out municipal annexations for the remainder of 2017.

Over the next several months, the city is also taking a strategic approach to annexing property based on sound municipal planning principals while keeping residents and long-term fiscal responsibility in mind.

As it has with previously strategic annexations, City Council is offering a development agreement to properties with existing wildlife management, timberland and agricultural tax exemptions as authorized by state law. These agreements would allow properties to remain in the city's extraterritorial jurisdiction (ETJ) for a period of 5 to 10 years in exchange for the property owner agreeing to limit the use of the property to agricultural purposes.

2017 Municipal Annexation Policy/Plan
In January 2017, McKinney City Council approved an update to the city's Municipal Annexation Policy, to include policy guidance on annexations and to outline anticipated future annexations as part of a municipal annexation plan. As part of this area identified as Area 17-1 (commonly referred to as North Walnut Grove) and Area 17-2 (commonly referred to as South New Hope) were identified for annexation in 2020.

Additionally, the comprehensive plan and long-range studies provide more information about the future plans for the City of McKinney. Please see the following links for more information.