The City of McKinney is preparing for comprehensive infrastructure improvements to Griffin Street and Pine Street from Baker Street to Barnes Street. Currently, improvements are planned to include the following:

If any assistance is needed reviewing the concept plans or you would like to schedule an appointment at our office, please contact our office at 972-547-7637 or by email at CIPprojects@McKinneyTexas.org.

We anticipate that the design of the planned improvements will be completed by the end of 2020. Once design is completed, the project must be publicly bid for construction and ultimately awarded by city council. This bid and award process can take between 8 - 12 weeks. We plan to begin construction in March 2021 and estimate the project will take 9 months to complete.

2. Will I have access to my driveway during construction?

3. Why is sidewalk only being provided on one side of the street?

A 4-foot sidewalk is being provided only on one side of the street based on the very narrow right-of-way and in order to eliminate the need for additional right-of-way to be purchased by the city. Because of the residential context of these streets, a single sidewalk will provide a designated pedestrian route to surrounding streets. The location of the sidewalk depicted in the concept plan was determined based on connection to other sidewalk facilities and reducing impacts to adjacent properties.

4. I have trees located in or near the street / public right-of-way. Will they be removed during construction?

Both streets were reviewed by the City of McKinney Arborist and take into account the location, size, and species of trees along Griffin Street and Pine Street in relation to the concept plan provided. This is important as the root system and ability to withstand nearby construction varies for trees. The concept plan designates trees in the street / public right-of-way that will need to be removed during construction. Although we have made every attempt to minimize impacts to trees, in some cases it was not feasible. In the instance tree roots (for trees to remain) are impacted during construction, the contractor will be required to have certified personnel ensure that any required root pruning or treatments are done properly to ensure the long-term health of the tree.

5. Will street lighting be provided as part of this project?

Street lights will not be included in the planned improvements. Existing street lights located on power poles will remain.

6. Why are portions of Griffin Street less than 26-feet in width?

The existing street / public right-of-way width on Griffin Street is only 35-40 feet compared to Pine Street which has a 50 foot wide right-of-way. In order to reduce impacts to adjacent properties, portions of Griffin Street have been proposed to be reduced from the city’s typical 26-foot wide pavement to 22-feet wide. This width still provides the ability for on-street parking on one side of the street and allows safe passing of other vehicles. A similar approach was taken previously along Cole Street where a narrow roadway was provided between Cedar Street and College Street. Although the current city standard for residential streets is 26-feet in width, a variance is considered in historical neighborhoods.

7. Will the street be concrete or asphalt?

The design of the proposed improvements will provide options for both concrete and asphalt. For either option, the roadway will include concrete curbs and underground storm drainage. A summary of some considerations of each is provided below. For either option, the pavement will be designed to ensure a long serviceable life before repaving is required in the future. A determination of pavement material will be made by the Engineering Department at a later date. 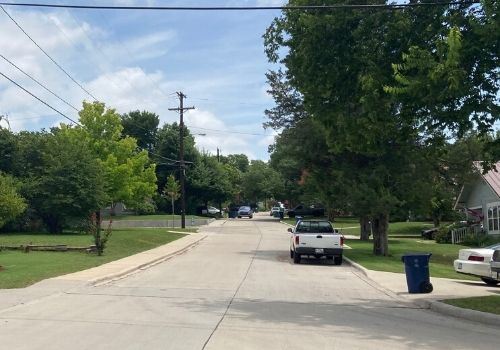 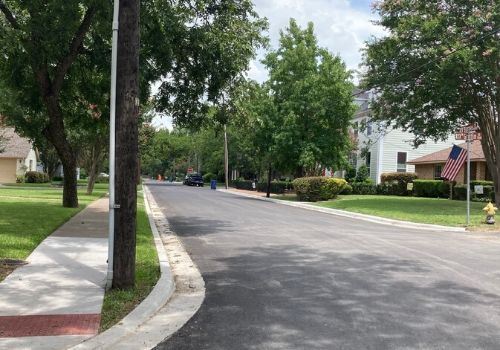