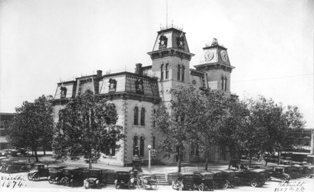 The Courthouse Square was established when William Davis donated 120 acres of land to the Collin County Commissioners, and is a prototypical example of a Shelbyville Square. Fifty-three of the 157 Shelbyville Squares in Texas are Prototypical, characterized by a courthouse in the center of the square surrounded by a park-like setting and various monuments. Sidewalks and the town’s major roads form intersections at the four corners.

Since Collin County's creation, there have been at least four courthouses located on the square. The first was built in 1848 of rough pine lumber imported from East Texas, and it stood on the southwest corner of the square. Some reports say the first courthouse was a one-room log house that was never used and was demolished in 1849.

A two-story frame courthouse was constructed on the square in 1856-57. Eventually, this was replaced by a Second Empire style courthouse that was designed by Charles Wheelock and constructed in 1874. When completed, it was said to be the tallest building north of San Antonio. This courthouse was remodeled starting in 1927 using plans drawn by W.A. Peters and carried out by A.J. Rife Construction Company.

The current historic courthouse represents a time in McKinney when cotton was king. The riches of the land provided the monies necessary to remodel the 1874-76 Second Empire French style courthouse into 1927 Neo-Classical Revival style. Notice the classical Greek elements such as the ionic columns. Thomas Jefferson believed that the use of Greek architecture for government buildings embodied democratic government ideals. The architectural design of the Courthouse reflects the democratic ideals of equality and justice since all entrances have equal access to the court. The last major trial in the Old County Courthouse involved a woman who was acquitted for the ax murder of her lover’s wife. The Old Courthouse was restored in 2006 and today serves as the McKinney Performing Arts Center.