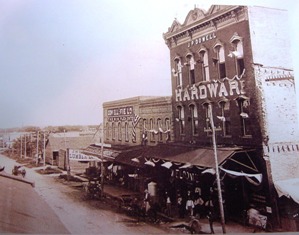 This building housed the Dowell Hardware and Furniture Store, founded in 1877. In 1922, the store was remodeled and is now a rare and excellent example of a Commercial-Style building using three-part, Chicago-style windows.

An interesting fact is that the store sold “Queensware,” a pottery invented by Josiah Wedgwood that brought exotic Chinese and Japanese porcelain styles to McKinney. Probably unknown to anyone in McKinney was the fact that Wedgwood was a member of the "Lunar Society" which met during the full moon in England. Members of the Lunar Society included such notables as Mathew Boulton and James Watt, inventors of the steam engine, Erasmus Darwin, father of Charles Darwin, who married Josiah Wedgwood’s granddaughter Emma. Thomas Jefferson, Benjamin Franklin and Antoine Lavoisier were distant members through correspondence.

This three-story brick building, built in 1888, once sold everything from hardware to animal feed to clothing. MYCON, a local construction company, purchased the building and rehabilitated it from 1998-1999. MYCON spent eight months rehabilitating the upper floors into offices while the first floor was kept as-is and leased as retail space. Today the first floor is home to Morningstar Treasures.